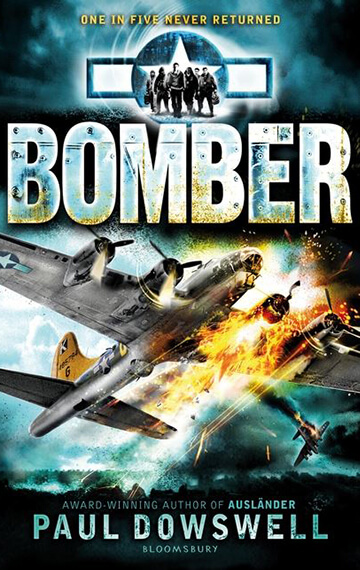 ONE IN FIVE NEVER RETURNED.
Every boy dreams of flying, but in war that dream can turn into a nightmare. Harry Friedman is the gunner of the Macey May, an American Flying Fortress stationed in East Anglia. The Second World War is raging and the Nazis have swept over Europe. The crews of every Flying Fortress face terrible odds on their bombing missions. To make it through alive, Harry will need luck on his side and courage … Courage to keep going when he has watched close friends die. Courage to confront a terrible evil. And the courage to make it home from deep behind enemy lines.

You can download the Teachers Guide to this book here.

One of Paul Dowswell’s greatest strengths is his ability to tell a story from an unexpected perspective. (His) novel humanises the stark realities of war, making them all the more shocking. Prepare to be impressed, horrified and surprised.

Harry’s story is genuinely gripping. I know he’s not real (!) but I actually found myself wishing he led a full and happy life after the war was over so Harry really did live and breathe for me.

Paul Dowswell brings the courage, the fear and above all the camaraderie of the young service personal engaged in the deadly missions of dropping bombs on Germany vividly to life.

Effortlessly transported back to WW2, the reader gets a real insight into the lives of the American airmen…

Paul Dowswell combines power and excitement with real historical facts. The perfect combination if you ask me…

A brilliant book, full of the history of the times and the descriptions of bombing running deep over enemy territory are realistic and enthralling.