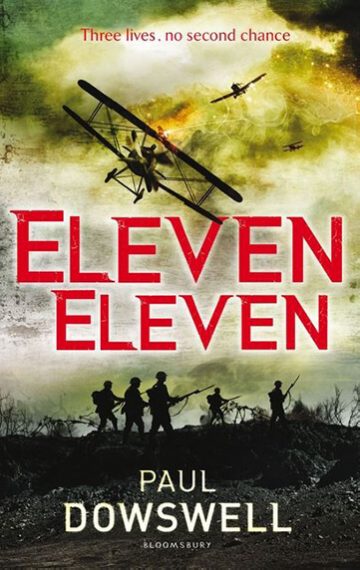 Set during the final 24 hours before the armistice at 11 a.m. on 11th November 1918, the story follows a German storm trooper, an American airman and a British Tommy. Their destinies converge during the death throes of the first ever conflict to spread across the globe. War becomes incredibly personal as nationality and geography cease to matter to each of these teenagers on the Western Front, and friendship becomes the defining aspect of their encounter. But who will live and who will die before the end of the day?

You can download a Reading Guide to this book here.

Paul Dowswell’s utterly gripping, award-winning novel follows three young combatants in the last hours of the war, when survival could only be seconds away.

The Guardian, Best Great War novels for children and teens.

Paul Dowswell has crammed all the horror, fear, waste, cowardice and courage of that terrible time, into a powerful and meaningful read. …It remains in the mind forever.

With every turn of the page mature readers will hold their breath, expecting the worst and hoping for the best. Paul Dowswell deals with war head on, leaving his readers in no doubt of its complexities and horrors.

This is a sombre and bleak story of war which will sit well alongside the poetry and factual accounts of life in the trenches and in the air. It is a deep and sad story… made so poignant because it all takes place on the last morning, leading up to Eleven Eleven. A teenage book of the year.

The main thrust of this thrilling novel — the futility of war — is vividly portrayed through the actions and interaction of three sometimes puzzled and overwhelmed young men.

Dowswell is good at blending believable fictional characters with authentic historical details into a potent gripping narrative… there is a thrill and a truth that will keep readers hooked until the end.

The story is brutal, violent and staggeringly effective… (its) powerful plot, characters and atmospheric descriptions are astonishingly vivid. This is a superb eye-opening book. It is especially welcome as an antidote to the proliferation of gung-ho militaristic adventure-story books for young adults of recent years.

This action-packed thriller combines historical detail with three very personal stories of courage, strength and tragedy, to produce a gripping and thought- provoking account of the final hours of a brutal conflict. This powerful page- turner is ideal for use in history teaching, as well as making compelling reading in its own right.

Paul Dowswell knows his stuff… War is not glorious deeds of derring-do; it’s a grim struggle for survival. Eleven Eleven will appeal to boys of 12 plus who want to know what life on the Western Front was really like. Recommended.

How can such a long and complicated piece of history be encapsulated into a short novel…? Paul Dowswell has performed something quite extraordinary in the way he took on this task. …this book succeeds admirably in bringing that extraordinary time back to life.

Amongst the many strengths of this story are the vivid action sequences and the very atmospheric settings… Most important of all is the way that the reader becomes caught up in the (story) and find themselves willing the three young men to survive those final hours of an awful conflict.

As we approach the 100th Anniversary of the start of World War 1, we will begin to be inundated by books and stories… If they are all as good as this one then we will have a generation who understand the full horror of war and the terrible waste of lives not much older than theirs…